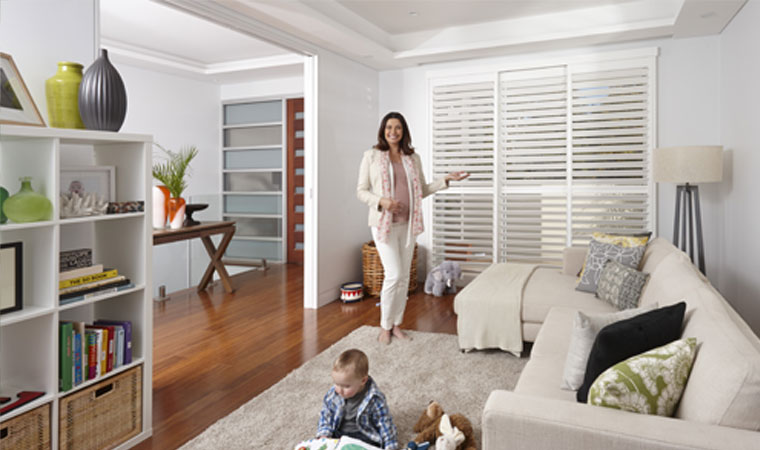 Your once-a-week house cleaning should be nothing short of thorough. You would never skip the sweeping and mopping of your bathroom, because dirt and grime obviously makes its way there too. The same standard applies to your furniture, light fixtures, and window treatments. Your curtains need a good washing and your shutters need a thorough dusting. But sometimes a quick, clean swipe just isn’t  enough. Some chemicals are actually hazardous to your window treatments and can cause more damage than good. Find out how to properly and safely clean your shutters, what to use, and how often you should clean them.

Whether you’ve invested in custom shutters or you bought them at a department store, it is important to know what kind of shutters you have. If they are custom made, call the contractor who installed them. They will give you a rundown on what you need for superior cleaning. Your plantation shutters could be wood or polywood and need to be treated with care. Since polywood is made from synthetic materials, you can go a little tougher on the cleaning. However, wood shutters will require careful attention. A vacuum, brush, or damp cloth will do the trick without warping or affecting the wood. Vinyl or painted shutters require little maintenance and the cleaning process can be accomplished with light soap and water, once a week.

Why Do I Need to Clean My Shutters?

Think about a time that you have cleaned your entire office or living space but left a smaller, more unnoticeable element out of the cleaning process. Your ceiling fan, for example, may be out of the way and less noticeable, but the blades gather dust throughout the day, expelling that dust and dirt into the air that you breathe. You may assume a monthly fan cleaning is ideal, but depending on the air quality in your home, you may need to clean the blades once a week. The same goes for your window treatments. They are lower to the ground, meaning they gather much more dirt and dust, which affects your air quality. Therefore window treatments need to be cleaned upon noticing the dust.

What NOT to Use on Your Shutters

While necessary to talk about the importance of cleaning your shutters, it is equally as important that you be aware of the elements that pose a threat to the natural condition of your shutters. Never use an all-purpose cleaner to clean your window treatments! If you do, discoloration or staining will surely follow. There are many tips and tricks out there that you will be tempted to try on your custom shutters; however most will do more harm than good, so consult the contractor who installed your shutters for guidance.

Each room has a different angle, different contents and layout, and will showcase a completely different view through your windows. Kitchens, bathrooms and children’s rooms tend to gather more dust and grease on your shutters. In order to keep them in mint condition, you will need to check them once a week. You may not realize just how much kitchen grease will permeate through the air and land on your blinds, which accumulates and causes a greasy film. At some point, it’s too late.

There are a few simple procedures that help keep your shutters clean without diving into too big of a mess.  Vacuuming the slats often will decrease your chances of buildup and allergens. Careful consideration should be taken with regular cleaning but a simple maintenance every other day will ensure a cleaner home.

When you’re cleaning, you may notice stiffening or loosening within the movement of the blinds. This is normal and usually occurs after much use of the window treatments, but it is easily fixed. Just grab a screwdriver and tighten or loosen the louvre on each side. Although you can easily patch up scratches and scuff marks with just a brush up of paint, call your local expert who installed your window treatments should you be skeptical about any part of the touch-up process. You may end up needing new shutters or they might suggest another technique to fix what you currently have.

Second to exterior shutters that can withstand the outside elements, Plantation shutters are pretty heavy duty and can take quite the beating. But they still need proper care and attention. To prevent damage to the slats, pay close attention to how you open and close them, especially while cleaning.

Real wood shutters are pricey but they offer much more value to your home. They are durable but can easily warp if not treated carefully. Water can be wood’s best friend or worst enemy if not properly used. Excess water can wreak havoc on your well-design binds and cost you much more of an expense in the long run. In order to properly care for real wood window treatments, avoid water-based products. Use only a specific wood polish or base for cleaning wood. A simple cloth and spray polish will do the trick without costing you that clean finish. You may even use a toothbrush to clean the crevices that dirt and dust tend to creep within the surface of the woods interior. Faux wood shutters are another element entirely and are much easier to clean, but are very delicate, unlike real wood. You may use water and soap on faux wood treatments because its base is PVC (which is waterproof and resistant to water damage). However, faux wood blinds easily fade over a short time. Therefore, wood shutters are a more practical choice when considering window treatments for your home. The maintenance is less worrisome and they will last longer than most other window treatments.

Rooms that need the Most Attention

Which rooms do you use more often? If you said the kitchen, bathroom and living area, you are probably among a majority of people who feel the same way. The kitchen is prime location to cook, eat, and enjoy company. The living space is where you unwind each night, maybe with a snack or two. You might spend a few hours enjoying television, a family game night, or movie on the couch. This area demands attention as well because of the constant exposure. Whether your family is doing homework in the kitchen or you’re hosting a party in the living area, your window treatments are one of the first elements that are affected. Take note after a large gathering, or by the end of the week, just how much use you get out of your shutters.

Of course, your installation specialist will be able to answer any questions regarding the look and appeal of your shutters. Should you need a replacement, fixed treatment, or estimate on a whole new setting, your local contractors can offer the assistance you need.

Contact the savvy team at Indian River Shutter Company for speedy and budget-friendly guidance while they walk you through their most popular styles and designs. Aren’t ready to make a commitment? The Indian River team will make on-site estimates to ensure you are in good hands when you’re ready.